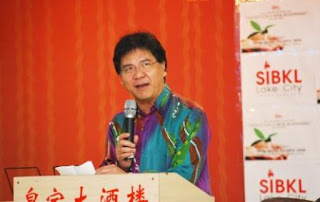 Last time while in MAS, some quarters of politicians especially the YBs in Parliament had asked Idris Jala (aboved picture) to step down because of petty reason being MAS delay flight.

Now Idris will face those quarters directly. Now, those YBs who asked him to step down before, have to perform when they remember and think about Idris Jala, failing which they have to give every explanation to Prime Minister.

This new tasks is different from previous job who were not politicians. I believe he had made his homework before accepted the offer.

That is in federal level. In state level, please don't forget our ancestral NCR Land that gone (include Idris' long house may be) which is now GIVEN to Companies through licenses for plantation, timber industry and forest plantation.

Idris appointment is on his merit NOT on political ground as said by PM Najib. Might be under Orang Ulu ethnic group quota that long vacant after senator George Adam Talik from Belaga.

Our brother Idris had informed us during our Dinner in KL last year (2008) saying that his calling is not in politics. Now he is going to be appointed as Senator and then Minister in Prime Ministers' Department without portfolio. He will be facing politicians around him. We still waiting how our Prime Minister going to explain this to the rakyat of Malaysia in accordance to Idris' principle saying that he is not interested in politics.

What our PM said so far is : "There is no one else is better than Idris Jala in government and in the country in turn around companies from loss to profitable one. Idris had good tract record...."

Wait and see what is going to happen. With the current turmoil in our political arena either BN or PR, we do hope that God gives Idris wisdom to face all these mess according to one of his principle that allow God's Intervention in his job.

Let us pray together for God's protection over him. Amen.
Posted by Web Master at 10:48 AM