KUCHING: Penans should be provided with what they need, not what we want them to be, in view of their unique nature.

Rais suggested that minister-in-charge of Penan affairs Datuk Patinggi Tan Sri Alfred Jabu take proactive approaches in reaching out to the Penan community so they would not feel left out.

“I know that Penans are a nomadic group therefore I urge my colleague from Sarawak, Tan Sri Alfred Jabu, to come up with some practical programmes for them,” he said during a meet-the-media session here yesterday.

Rais said his ministry would initiate discussions with the state cabinet to look into feasible programmes to assist the Penan community.

He was hopeful that by the end of this year, some initiatives could be launched to begin a series of concerted efforts to improve their welfare.

In Peninsular Malaysia, the government had implemented several programmes for ‘orang asli’ to enhance their standard of living, he cited as an example.

In Sarawak, rainforest music could be a key factor to get the Penans closer to others, he added.

Issues pertaining to the Penans have been getting attention from international non-governmental organisations (NGOs) and the media.

Last month, a report was released by the Women, Family and Community Development Ministry on the alleged rape and molesting of Penan girls by logging workers in Baram.

Asked to comment on it, Jabu, who is also a deputy chief minister denied the allegation as he believed that NGOs had a hand in the report. He, however, said investigations must be launched if the allegation was true.

On an unrelated development, Rais said the ministry together with state agencies Danawa and Sacofa as well as Malaysian Communications and Multimedia Commission (SKMM) would give due attention to ICT infrastructure in rural areas.

Sarawak has a 15.5 per cent coverage of Internet facilities with the majority in urban towns, he revealed.

With advanced technology taking place, parents should be watching closely their children’s online activities to prevent them falling prey to cyber predators, he added.

“Parents must be prepared and be aware of what their children are browsing on the Internet, the pictures and video clips they watch and download. In five years’ time, our values of life will change,” he predicted.

COMMENT:
FOR PENANS, PRESERVATION OF THEIR ANCESTRAL LAND IS THEIR ULTIMATE PRIORITY TO THEM. THIS SHALL INCLUDE VIRGIN JUNGLES.

MUSIC IS LESS IMPORTANT TO THEM.EVEN THOUGH RAIS SAID IT IS IMPORTANT. NO HARM SAYING SO.

THEY WANT THEIR RIGHT OVER LAND NEED TO BE RESPECTED BY GOVERNMENT BY A MEANINGFUL MEAN EG. ISSUE THEM LAND TITLE.

THIS WHAT THEY WANT. OTHERS ARE JUST COMPLIMENTARY "DEVELOPMENT" WHICH THEY NOT REALLY NEED ACCORDING TO THEM.

DON'T FORCE THEM TO ACCEPT "DEVELOPMENT".

BELOW ARE WHAT PENANS IN MURUM WANT:
1. The Penan should be the one to decide where they should be resettled. For Murum case, they want to be resettled in Ulu Peliran;
2. The government must ensure that basic amenities are readily available before the communities are resettled. Such amenities should include concrete house, water, electricity, clinic, school and others. The amenities should be given for free;
3. Land must be provided and given to the affected families for cultivation. They should be suitable in quality and sufficient size;
4. Each affected family should be compensated with RM500,000.00.
Posted by Web Master at 6:28 PM No comments:

Email ThisBlogThis!Share to TwitterShare to FacebookShare to Pinterest
Labels: DEVELOPMENT


Find more videos like this on ORANG ULU SARAWAK


Find more videos like this on ORANG ULU SARAWAK 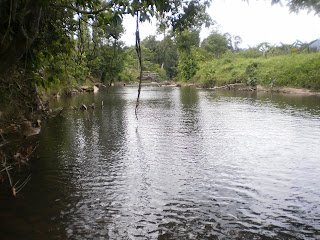 We do hope this river would be the same forever.
Posted by Web Master at 5:38 PM No comments: