The art of the impossible 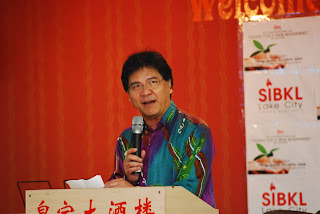 The loftier the targets, the more he thrives and loves it. But there’s an x-factor – things you can’t control. That, the stoicly spiritual Idris, leaves to divine intervention. But he explains how you can get the divine to be on your side – more on that later.

There is an important caveat for those wanting to transform companies. There has to be personal transformation first.

“For me, my baptism of fire was when I went to as the CEO of Shell in 1998. The company had acute problems and had been losing money for years.

“If I had relied on my textbooks, there was no way I could fix the problems. During that time, I had to unlearn what I had already learnt. I had to reinvent myself to make the impossible happen,” he says in an interview.

To make the impossible happen – that was the key. But how?

“After my experience, I was a different Idris. Before that, I never believed in the game of the impossible. I was scared of failure and would never think of setting unthinkable targets.

“If you always do safe things, then you will never realise your potential. But if you stretch your targets and push yourself to the limits, you will be surprised at what you can achieve.”

The book by Tracy Goss titled The Last Word on Power/ Executive Reinvention to Make The Impossible Happen helped shaped Idris’ ideas, and today, he makes all his staff read it. “It taught me how to think,” he says.

It is exactly because of his fire for restructuring troubled companies that saw Idris accepting the gargantuan challenge of turning national airlines MAS around in 2005. He got right down to business. On the first day itself at 8.30am, Idris presented his turnaround blueprint to the board of directors.

Idris went so far as to make the business turnaround plan totally public – something never been done before by a listed company in . And everybody felt Idris’ targets were crazy. They were wrong, of course.

He breaks down the turnaround process into four crucial parts:

·Build the case for change and get the buy-in from stakeholders such as the board, employees, shareholders and the Government.

·Lay the facts on the table and explain their consequences. “I told them, if we don’t change, we will run out of money in three months,” he explains.

·Unleash talents, much of which was done through running laboratories, where people were put together in rooms to come up with solutions to problems.

·Focus on the profit and loss (P&L) accounts. “If an activity did not generate profit or reduce losses, I was not interested.”

“Today, all MAS staff are very aware of having to anchor everything to the P&L statements. We have created leaders and seen so much potential from our staff through our strategy of running laboratories,” he says.

Despite Idris pinning everything down to numbers and getting to the root of problems, he is a strong believer in divine intervention – God or fengshui, or something else if you prefer. Idris believes the majority of things that happen in our lifes are beyond our control.

“We cannot control 60% of the things in our lives. With the 40% that we have, we can try our best. It does not matter if we fail. We need to recognise that we are vulnerable. That gives us the peace of mind.

“We need to bring in the element of humility. The day you think the world is at your feet, that is when pride sets in, and it is over,” he says.

He thinks divine intervention works to one’s favour, when you do some things.

First, be a good human being, for instance, helping the poor.

“Recently, we increased the salaries of all MAS staff earning below RM1,000 (per month). Now, there is no MAS staff who earns below RM1,000. This may increase cost but we need to do the right thing, which is to help our staff make a decent living and support their families,” says Idris.

Second, Idris believes in having the right values, in terms of being ethically correct.

For instance, in business dealings, there are always the white, grey and black areas. Many times, people are forced to step into grey areas when making decisions.

Third and very importantly, Idris believes in self-renewal and time for solitude and reflection. It is during these period that one should take the time to count one’s blessings.

“Most people are not happy because they are living for another day. That is why they are jealous of their neighbour’s new car or new house. What is enough for a person? For me, what I need is a house, a car, insurance and education for my family and money to buy my blues CDs. Everything on top of that is luxury.”

Adds Idris: “Don’t take things for granted. I believe that when somebody dies, suddenly life is different. You realise that very few things are important. That we should just be happy to be alive.”

Nonetheless, Idris also believes that if you want something bad enough, somehow you will get it.

He cites Paulo Coelho’s The Alchemist and quotes one of the phrases in the book: “If you want something desperately, the whole of the universe will conspire to give it to you.”

A spiritual person, Idris is a practising Christian who prays diligently. If there is a Sunday where he does not attend church, he will hold mass at home where he leads by conducting readings for his family. He even prays with his 19-year-old son Leon (who is studying in ) via Skype.

Idris’ life principles are based on love, enabling others, God and passion. Passion, for him, is a convergence of heart, soul and mind.

He believes in the importance of getting married and having children. After 26 years of marriage, Idris keeps his marriage alive by having love, commitment and respect for his wife, Datin Sri Pang Ngan Yue.

“Marriage is about give and take. I believe that when you first decide to get married, you need to be deeply in love. You need to be sure that you have found the one. It is about two people becoming one. You can never be right all the time,” he says.

As for enabling others, it is about taking a back seat, or sacrificing oneself for the betterment of another. Idris says he feels great when he enables someone else to feel good about themselves.

Last Friday, Idris performed in a concert for the first time at the Groove Junction pub in Sri Hartamas. While he demonstrates much adroitness with the guitar, his main motivation for playing was to get his son Leon to perform in public.

“ plays a mean guitar. I have asked him before to play but he refuses. So the only way to get him to perform is if I also perform. That is why I put my name down that night,” he says.

On this note, Idris’ first guitar was made of two pieces of plywood, which he strummed at the age of 13. His favourite blues musicians include Kelly Joe Phelps, Eric Clapton, BB King, Buddy Guy and Jackson Brown, among others.

Idris’ other great passion is deep-sea fishing, a passion which has brought him to the , Vancouver Island and .

“Once I went fishing in . The skyline was beautiful and we caught fish and ate it with wine. That was such a perfect moment. And I thought, that would be such a perfect way to die!

“If you catch a perfect fish and then have a heart attack, I think that is a nice way to go,” laughs Idris.

And what’s next for MAS? As announced, it is talking about transforming into a five-star value carrier, earning RM1.5 to RM3bil – yes you read right, as much as RM3bil – a year by 2012. Impossible? Don’t bet on it.

WHAT made you agree to take up the job in MAS?

I came because I was very passionate about turnarounds. The Government came to me via Khazanah. I never applied for it.

The person who was really chasing me (for the job) was Khazanah MD, Tan Sri Azman Mokhtar.

In transforming MAS, what was key in enabling you to succeed?

Transformational leaders must pursue the game of the impossible. That means you must put targets that are seemingly impossible for everyone else, and you state them and go further. You need to conquer the fear of failure. And if you’re not able to do that, most of us will then say, if there is a high chance of failure, I’m not going to do it. I’m going to do the safe thing.

I believe if you put really stretched targets, you have no choice but to reinvent and push yourself to the limit.

How did you succeed in implementing all the positive changes in MAS?

It is all about unleashing the talent. We run laboratories. We get people to come into the room and solve the problem. That is the answer.

In MAS, there are many good people, you just need them to do the right thing, the things that matter to the company’s P&L. It’s a good airline. The product and services are good, but unfortunately it was not making money. I always say - if something does not improve the P&L, then it is not a priority.

This belief in divine intervention, when did that happen?

I have always believed this. I find that more than 60% of what happened to me, happened not because I planned it. They just happened.

Email ThisBlogThis!Share to TwitterShare to FacebookShare to Pinterest
Labels: Sharing